He came, he saw, he conquered, he left. On the 24th January 2014, Jose Mourinho confirmed that 2 time Chelsea player of the year Juan Mata, will have a medical on the same day. Mr Mourinho had this to say ''the offer we've received we feel is the right offer for the quality of player.'' Jose also stated that Juan Mata was unhappy and that he did ask him if he wanted to go to which Mata replied ''I want to go.''
It is a great shame we are losing such a fantastic player in Juan Mata to a great rival in Manchester United but sometimes, money speaks volumes. Selling a player who was on the bench the majority of the season for £37-£40 million is a sum too handsome to turn down. In theory, Chelsea are making a healthy profit of about £14-£17 million. As every Chelsea fan will understand, it is hard to lose such a fantastic player but Juan Manuel Mata Garcia made up his mind and wants to trade London for Manchester. He was unhappy towards the end.

The fact that we are selling United, one of our big rivals, a match winner who undoubtedly, has immense qualities, is horrifying. What makes this worse is that there is no Rooney coming the other way as of yet. United were reluctant to sell us Rooney yet we jump at the fact if there's a lot of cash involved, Mata is theirs.
Juan Mata is not bigger than the club. If he doesn't want to knuckle down and earn his place, leave and we'll be better without you.
One potential player coming in is Mohamed Salah. The fee has been agreed with Basel for £11 million but still need to agree personal terms and needs to have a medical before he's officially a Chelsea player.  So that's two in and two out, with Kevin De Bryune already left club for Wolfsburg in Germany and Nemanja Matic brought in from Benfica. I have a feeling Essien will depart soon and perhaps one or two will come in. Rumous have it, we've been linked with these players recently;
Antoine Griezmann (Real Sociedad)
Hulk (Zenit Saint Petersburg)
Wayne Rooney (Manchester United)
Luke Shaw (Southampton)
Julian Draxler (Schalke)
Isco (Real Madrid)
Kurt Zouma (ST Etienne)
Ross Barkley (Everton)
Diego Costa (Atletico Madrid) 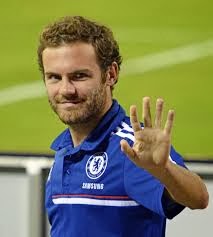