Following a nightmare performance by Chelsea FC, one I wish to forget very quickly, I do believe Chelsea need to make a few purchases, while also find a new suitors for certain players. The main positions where Chelsea need to strengthen are; CDM, RM and possibly at CB.

Let's begin with the CDM role. Nemanja Matic was run rigid at White Hart Lane. When he was suspended against Newcastle, there was no cover. John Obi Mikel is no way near in the same bracket as the powerful Serbian. What answers will Jose Mourinho have if Nemanja Matic gets injured? The Mikel-Fabregas pivot doesn't quite excite us Chelsea supporters as much as when Nemanja plays.

- Sami Khedira? Rumoured to be unhappy under Carlo Ancelotti and his contract running out very quickly. At the age of 27, he is at the peak of his career too.

- Morgan Schneiderlin? Has proven experience in the Premier League, tabloids reported in the summer that he was seeking a move away and being aged 25, could potentially have room to cement a position.

- Sven Bender? A German CDM who perhaps lacks the publicity that he requires in the Borussia Dortmund side. As Dortmund sit in 17th position (bearing in mind there are only 18 teams in the Bundesliga) Sven Bender could be an interesting option to bring into the Premier League. Also bear in mind, he is 26 year old.

Let's forget signing Paul Pogba because it simply won't happen. The Blues will not be paying £60 million or anywhere near the same type of money after learning what a certain Spaniard can do.

Sell: John Obi Mikel. The big Nigerian simply isn't Chelsea standard. Although he has been popping up with goals of late (3 goals in the last 2 seasons) the man is simply frustrating to watch. Sideways and backwards passing is not always the answer.

-  Marco Reus? A player who cannot be hated (supposedly). Despite the fact he is injury prone, when he's on form, he is truly phenomenal to watch. When analysing Chelsea games, almost every team doubles up on Eden Hazard, imagine if there was almost a carbon copy who was taller on the other side. This is potentially what each world class team have. Robben and Ribery. Ronaldo and Bale. Messi and Suarez.

- Raheem Sterling? Stalling on his current Liverpool contract, could Chelsea potentially pounce? Would certainly be interesting to watch Hazard on one side and Sterling on the other.

Sell: Mo Salah. I'm not really sure why Chelsea bought him in the first place. I have a feeling it was so that Liverpool couldn't buy him. A waste of money and squad depth in my opinion. He doesn't offer anything different than Willian or Schurrle apart from his blistering pace.

In spite of Chelsea's heroic displays at the back (minus the game at White Hart Lane) the one soar thumb this season, is Gary Cahill. Woeful displays of late had me screaming in front of the TV. Normally a very composed, calm and careful defender, he has been costing the West London side vital points. Now, I think he should be dropped until he recovers and Kurt Zouma to fill in for him. This potentially could be tricky because I'd rather see Zouma on loan to a Premier League side for the rest of the season meaning he plays every week.

-  Raphael Varane? Chelsea have been rumoured for 2 years now to make a bid for the young French centre back. Jose Mourinho is a huge admirer and I wouldn't be complaining if the Real Madrid defender found a new home at SW6. The only problem I'd have is where would that leave Zouma, Christensen and Kalas in the long run? 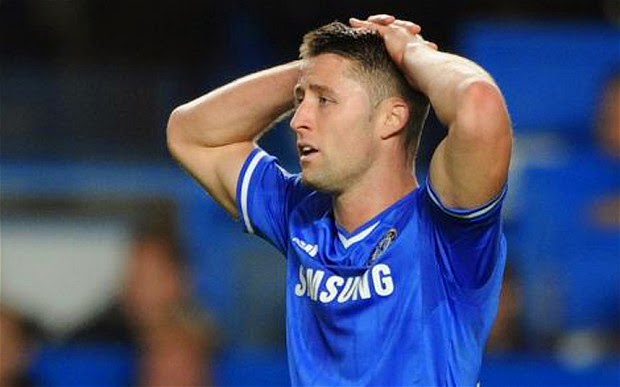