All change please, all change

All change please, all change

With an upsetting 3-1 loss to Everton in the early kick off at the weekend, Chelsea FC look to rubber stamp their normal selves on the European stage. With both English clubs losing 2-1 last night, the Blues hope to announce themselves on the big stage. Maccabi Tel Aviv, already playing 6 Champions League games to reach the group stages, knocking out FC Basel in the last round, will surely fancy piling more misery on the wounded English side.

Eran Zahavi, their star man (who is a midfielder) has already scored 7 goals and 2 assists in 5 appearances, will likely cause trouble for the West London club. He has scored 5 goals in his last 3 Champions League games. Food for thought for Mourinho as he must look for ways to kee Zahavi at arms length at all times. A goal scoring midfielder, I wonder if the Blues fans still remember that type of player.

Rotation is needed more than ever to ensure Chelsea get a positive result on Match Day 1. Time and time again this season, Branislav Ivanovic has been slaughtered for his lack of defending. Never have I witnessed such a rapid decline in a star performer of last season. The powerful Serb misses cutting edge, power and wit to unease his opponents. The relegation to the bench is unavoidable for the right back. In his place, comes the ever hungry, Cesar 'Dave' Azpilicueta. Deployed at LB (left back) for the majority of the Mourinho era, Spaniard Azpilicueta, hopes to move to his favoured position of right back and therefore Baba Rahman, a summer arrival, is given the chance at left back.

Now this maybe a little unfancied by the Chelsea fans but rumour has it, Mourinho is set to axe Nemanja Matic in favour of Ruben Loftus-Cheek. I'd rather see a Matic-RLC pivot than one in for the other. With a huge game and bragging rights coming up on the weekend against Arsenal, I would like to see a strong wall to protect a vulnerable back four. Furthermore, I feel like Nemanja Matic, had a good game against Everton, took his goal very nicely and wanted to motivate his team mates, unlike Fabregas, who is well out of form. This time last year, he already bagged 6 assists, this time round however, he has none. Awful. With Oscar and Pedro out injured, I would fancy a Kenedy-Hazard-Willian attacking midfield with Fabregas, again, relegated to the bench.

Another rumour circulating is that Gary Cahill will come into the side and deputise for the club captain John Terry. Maybe a rest for the latter, thinking of the game ahead against Arsenal perhaps.

Lastly, Diego Costa has been nothing shy of woeful this campaign. Certainly a domino effect. If he can't get the ball, he won't score. Fabregas, the main assister to Costa's 20 goals last season, has not found the striker once. Therefore, Costa could well be watching the game from the bench as Loic Remy, who is yet to play this season, is given a run out. Finally, some pace and movement to trouble a team. Radamel Falcao is out with a small injury and should be back in time for the early kick off against Arsenal on Saturday.

The West London side really need to begin clicking otherwise, Mr Mourinho's job could be under scrutiny. 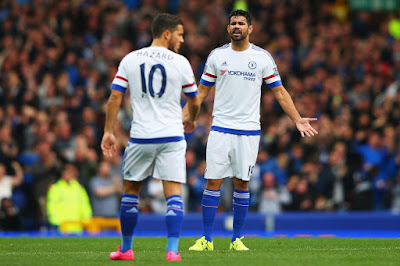