I had a dream. More of a nightmare than a dream. Jose Mourinho would be sacked after some abysmal performances by the Blues. The Special One attempt II, was over. This unconscious thought is becoming more and more of a reality if Chelsea do not turn on the engine and start climbing the Premier League table. How many more games, will the man upstairs allow Jose Mourinho to have, before the Portuguese tactician's head is hanging on a stick? My answer can be counted on one hand.

This enables me to proceed to the player's performance. With the exemptions of Asmir Begovic, Cesar Azpilicueta, Willian and possibly Kurt Zouma, can the real Chelsea FC, please stand up?  Two months have now passed into the new season and the SW6 side are currently languishing in a mere 14th position in the Premier League. I admired the determination in the 79th minute to gain a point in the fixture however, I saw nothing of note prior to the last ten minutes, to even attempt to score. Strange how football can turn with the click of one's fingers.

Players such as Eden Hazard, Pedro Rodriguez, Nemanja Matic and Cesc Fabregas really must find another gear otherwise, I see a lovely seat with their names inscribed on the bench.  However, a player who has been getting so much criticism, and still finds his name on the team sheet is vice-captain Branislav Ivanovic. Time and time again, and most notably, the defeat in the Champions League to FC Porto, in mid-week, at the Estadio do Dragao (Dragon's Stadium in Portugal) Ivanovic was caught napping and allowed Yacine Brahimi to cut inside time and time again. The out-of-form Serb surely this time round, must must MUST find his name on the bench. In this current moment in time, I fail to see any positives in the Serbian.

The next game is on Saturday 2nd October 2015 against Southampton at home, 5:30 pm UK time  and it is surely time, for Mourinho to bring in the highly rated Baba Rahman to left back, allowing Cesar Azpilicueta to move to his favoured right position. The former, rated one of the best fullbacks in the Bundesliga last term, has barely had any playing time for the Blues. This will surely test him against the pace of Southampton. The last two games ending in 1-1 draw, this time however, I hope Chelsea manage to grind out a win and get the season in the right direction. 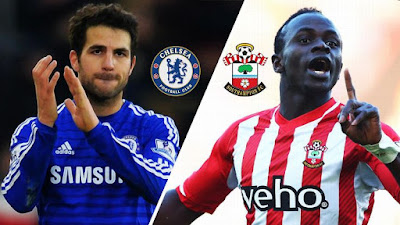